"The global procedure trays market was worth $8 billion in 2018, and the opportunities are projected to increment at a notable CAGR of 10.34% during the forecast period of 2019 to 2025."

The procedure trays market has been disrupted by customizable surgical trays that have been rapidly adopted by hospitals around the world. With incessant growth in incidences of chronic illnesses and road accidents, the demand for surgery is visibly rising globally. While procedure trays are underrated components in a surgical procedure; their role is indispensable as a surgeon relies on them for quick access to tools and instruments. Owing to this, key market players are now innovated and have invented customizable trays that can be made specifically to cater to different kinds of surgeries. This has greatly helped doctors all across the world by removing unnecessary tools and instruments. As of 2018, the global procedure trays market was worth $8 billion, and the opportunities are projected to increment at a notable CAGR of 10.34% during the forecast period of 2019 to 2025.

Based on region, the market is segmented into Europe, Asia Pacific, North America, and rest of the world. North America has emerged as the geographical leader of the global procedure trays market, owing to developments in the U.S., Canada, and Mexico. The region held 27% share of the total revenue earned by the market in 2018. Healthcare sector has always been a top priority for the U.S. government and the country houses some of the best quality care institutions in the world. Despite the U.S. being the only country in the world without a publicly funded health system, it spends an incredibly large amount on improving healthcare facilities that could benefit citizens. Several key market players have now introduced customized trays that have become a part of these facilities’ inventory, and are also being commercialized to hospitals and clinics for optimizing surgical procedures. Mexico has also greatly contributed to this revenue share by engaging in medical tourism. The Mexico Bariatric Center in Tijuana has attracted a number of patients from all over the world, by offering gastric bypass surgery at subsidized rates to obese patients facing high risks of chronic illnesses.

Necessity for Reduction of Preoperative Cost

According to findings by America’s Debt Help Organization, in 2017, total spending on healthcare services and research in the country amounted to $3.5 trillion, of which $1.1 trillion was spent on services obtained from hospitals. These statistics are alarming and point out at the expenses related to general health services. On an average, hospital stays amount to approximately $15,000 according to debt.org, which is reflective of the tremendous costs associated with patient care in the country. Obtaining diagnosis and treatment is therefore, a hefty investment which a normal, middle class family cannot normally afford. Minimizing operative costs has become the need of the hour owing to these reasons and the procedure trays market has a crucial role to play. There are several simple ways that hospitals can reduce unnecessary expenditure and one of these is surgical tray optimization. A study by the National Center for Biotechnology Information on how optimization of procedure trays can lead to reduction of preoperative costs, found that surgeons and hospitals benefitted from customized trays that contained only the most essential surgical instruments. This has been crucial for the procedure tray market as this premise will aid the market in attaining growth in upcoming years.

The number of surgeries performed in the world is immense and hard to track with mismanaged and underwhelming data recorded from poorer countries. Despite this, patients have developed trust in surgeries for curing illnesses, especially with the advent of non-invasive and minimally invasive surgical procedures. A prime example is the rise of bariatric surgeries that is now being prescribed over drugs for curing diseases such as diabetes and obesity. It is a surgical weight loss intervention procedure that doctors and governments are increasingly supporting owing to its high success rate in reduction of chronic illnesses, the risks of which are elevated by excess weight. Furthermore, medical tourism has also contributed to a complete change of landscape in the healthcare industry. With health care facilities being excessively expensive in the U.S., patients are traveling to developing countries for soliciting surgeries at reduced rates. According to a journal titled ‘Medical Tourists: Incoming and Outgoing’, published in the American Journal of Medicine, approximately 1.4 million citizens of the U.S. travelled abroad for receiving healthcare services. These majorly included procedures such as weight loss surgery, dentistry, and cosmetic surgery. This statistic is reflective of quality healthcare facilities emerging in developing nations, thus making affordable healthcare accessible to all. Procedure trays market has benefitted immensely from this system as the demand for surgical trays is on the rise in hospitals around the world. With consistent rise in the number of surgeries, the demand for customization in surgical trays for reducing operative costs will highly benefit the market.

Companies are investing in R&D significantly and launching innovative products that are changing the landscape for the procedure trays market.

Dublin-headquartered American company Cardinal Health has developed trays such as Lumbar Puncture trays that come with a self-healing automatic valve, Turkel Pneumothorax Procedure Tray which doctors are soliciting for ideal placement of catheter drainage systems, and others.

U.S.-based Medical Action Industries, Inc. is known for its state-of-the-art disposable medical supplies that has catered to needs of surgical patients and doctors for a considerable amount of time. The company recently began sales of customized procedure trays for nearly all types of surgeries including orthopedics, cath lab, labor and delivery, gastric, trauma, and others. 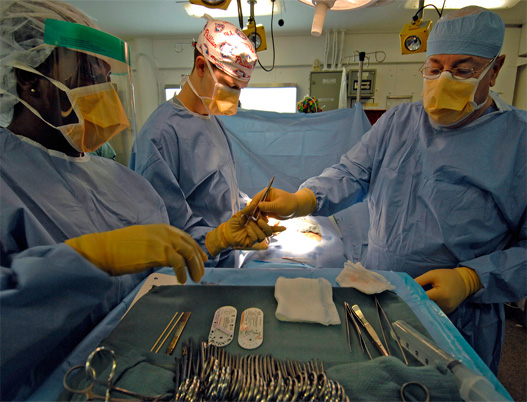